Contribution to EDUVINET Didactically and Methodically: Internet and Teaching

Even before World War II individual attempts were made in some European countries to move away from the traditional teacher-centred lesson in favour of greater active student participation, but until the 1970's such alternatives, in grammar schools at least, received little attention.


Then until the 1980's two opposing trends were to be seen, i.e. on the one hand in growing differentiation of lesson contents through partly new school subjects or even the creation of different school types with technical, linguistic or economic bias; on the other hand education reforms in the 1970's strengthened efforts to give greater consideration to students' learning needs through pair and group work and projects.

From the mid-80's block teaching and learning were given a new incentive by the so-called key qualifications in response to the requirements of industry and of particular importance in vocational training institutions.

Table 1A provides a conspectus of education contents and aims up to the 1980's.

Fig.1.1B shows the traditional classroom organisation, for decades accepted as the normal set-up, with more or less all impulses starting from the teacher, the students being receptively involved. This kind of teaching - if it is to work - demands a large measure of discipline, willingness to learn and concentration on the part of the students.All three qualities were becoming rarer among young people at the end of the twentieth century and had to be imposed by the teacher, sometimes with repressive measures, which can lead to an authoritarian type of teaching.

Group Teaching (Vd. Fig.1.2.B) leaves students greater freedom for their own creative solutions and most key qualifications can only be attained in this way. Group teaching, moreover, is much better preparation for life in society and at work than the traditional set-up. Even in foreign language teaching hundreds of teachers have tried for years to find new ways. In Germany a whole new network has been developed to allow teachers to exchange examples and experiences of the "Learning through teaching" method. http://www.ldl.de

In many cases group teaching can be carried out by one teacher alone, as even in group-work with different tasks different aspects within one subject or topic are dealt with. If the teacher is qualified in two or even three subjects, then of course he can cross subject boundaries. In vocational institutions there are many cases where practical solutions can only be found by involving different subjects, such as metalwork or electrotechnology, in mechanical engineering and energy technology.


Abb. 1 B Unterrichtsorganisation (Methodik)
Fig. 1 B Organisation of lessons (Method)


II Cross curricula teaching in the arts, too?


It is probably true to say that cross curricula teaching in grammar schools in Europe has been the exception rather than the rule.

There is a number of reasons for this:

This situation will, however, soon change,

Figure 2 B shows how cross curricula teaching involves two, three or even four teachers at a time. This does not mean an immediate increase in teaching hours per class, but each teacher uses part of the time designated in the timetable for a particular class for a coordinated (subject overlapping) solution of tasks or projects. This of course demands from teachers team-work they were not trained for. On the other hand society insists more and more that they teach students key qualifications such as team-work, social and media skills.


III What has the EDUVINET project done to improve the situation described above?

When in 1995 a relatively small group of only three people - an economics teacher, a teacher of history, politics and geography and a data-processing expert - set about formulating a request for a SOKRATES ODL pilot project, it really was breaking new ground, for at that time in Germany there was little experience with using Internet in schools and none with with cross curricula teaching combined with ICT.

Firstly we had to make our own ideas fit the aims of the SOKRATES ODL programme. Table 3 A shows how we were broadly successful in this, although in 1995/96 Brussels was probably thinking rather of the University over the Air than of distance learning in the work of normal secondary schools.

Organising the realisation of this project sometimes proved very difficult between 1996 and 1998 (Vd. Fig. 3 B). At first we adopted the so-called "top down" method, i.e. project partners drew up in discussion three topic areas for the development of teaching materials on a European level:

These materials were to serve as the basis for teacher discussions and student work in member countries of the EU.

The three topic areas were determined by the interests of the EU and of the teachers, who were thinking far beyond the possibilities of their own national curricular. On the one hand this meant a certain dependence on university teachers and practical eonomists, on the other hand the content and sometimes style of language proved to be within the grasp only of very good students. Moreover, the above topics were only a very small part of the school curricula at the time.

This was also partly due to the fact that it is much more difficult in general subjects than in science to agree on topics of equal importance to many member countries.When after long discussions they were found, there was still the problem of translating into the languages of the other member countries. Either there was not enough money or there were not enough bilingual colleagues among the project partners who were able to translate materials.

The EDUVINET team published well over 1000 Internet pages in two years, but it is difficult to know how many were actually used in teaching in different member countries. Even if the EDUVINET Service is visited 300 to 400 times a day it is often the language of the material offered or that of the visitor that determines the use of the pages. 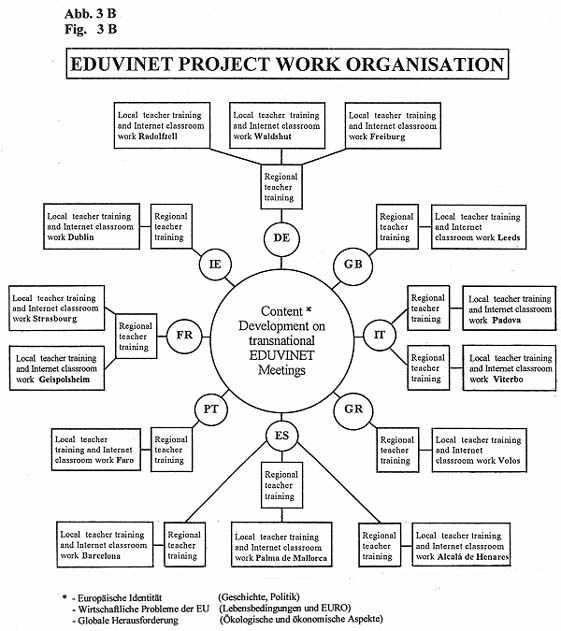 In August 1998 the end of the EDUVINET project saw two different developments which have to some extent left their mark in the EDUVINET Service (http://www.eduvinet.de) (Vd. Table 4 A).

Thanks to the personal involvement of colleagues from the sciences ICT utilisation saw a rapid increase, which can also be noted in statistics on users of the EDUVINET Service .

There are two reasons for this:

Since with one exception the materials are in German, they are inaccessible to non-German speakers.

Here the EU Commission could provide electronic manuals at relatively little cost and thus contribute towards comparability of student achievement in different member countries of the EU.


V Information and Communication Technology at the service of Transnationality

Table 5 A shows how teaching across national borders is not only desirable but thanks to ICT provides a feasible new dimension in teaching.

The cross curricula group and project teaching described in Chapter II and Fig. 2 B is extended through international or transnational components. It is important for teachers to have previously agreed on common topics. Such topics can be found in several languages at:

For best results many more details must be clarified; the more accurately this is done, the better student work can be compared.

It is certainly an advantage when students are working on the same topic to get in touch with each other as soon as possible in order to ask queations, exchange information and give each other advice. Early experiments of this kind can be found in the EDUTALK Discussion Forum:

In the content of their work students will be supported by at least one subject teacher, whereby the latter not only contributes his or her specialist knowledge to the work but also the teaching time allotted to the subjects involved - that is, where the timetable does not provide for cross curricula teaching.

Fig. 5 B shows the situation in Spring 2000. In France, Poland, Spain and Hungary one teacher had to cope alone with the problems of cross curricula and cross border teaching, while in Germany sometimes language staff helped and a computer science colleague added two extra hours a week to the work time of some of his students. This produced Internet pages that a German or history teacher could not have managed alone.

Examples of such student work can be found in the relevant chapter of the EDUVINET homepage:
http://www.eduvinet.de (Vd.Fig. 4 B.)

e.g. under Society
- Living conditions of young people in the European Union
http://www.eduvinet.de/eduvinet/geselle.htm

under: Politics
- Thoughts of students about Europe
http://www.eduvinet.de/eduvinet/politen.htm

under: Economy
- Thoughts of students about different aspects of tourism
http://www.eduvinet.de/eduvinet/wirten.htm
(This includes some Spanish contributions)

A broad realisation of the teaching aims as well as of the methods in cross curricula and cross border teaching belongs to the future. Being convinced, however, of the meaningfulness of these aims signifies starting to collect experience.